Conduct and Mental Attitude of a Devotee of the Truth 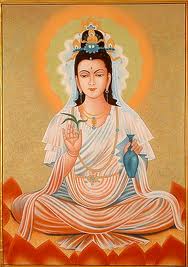 Respect everyone. Help everyone. Forgive everyone.
Bring happiness and joy to others while leaving the difficulty and pain for oneself.
Behave responsibly and attend to one’s duty.
Be strict with yourself and lenient with others.
Be honest with yourself. Be sincere towards others. Be humble.
Conquer your ego, selfishness, vanity and fear.
Overcome your greed, anger, ignorance, arrogance and doubt.
Be nonviolent in action, speech and thought.
These are the eight accomplishments of the one who enters the Path.


THE MINIMUM QUALIFICATION OF A TANTRIKA

Adhere to the Conduct & Mental Attitude of a Devotee of the Truth
Practice daily Tongue Dharma over 100 days – The Word.
Chant each of the 33 mantras over 10,000 times – The Light.
Chant at least one mantra over 1,500,000 times – The Shining.
Complete full prostrations over 100,000 times – Great Worship.
Participate frequently in unconditional service – Great Giving.
Practice daily Vajracitta over 100 days – Great Repentance.
Uphold the transmission purity of the dharma lineage – Great Offering.
These are the eight preparatory practices of a Tantrika.


THE SERMON OF BODHIDHARMA ACCORDING TO ZANZE PANDIT
There are two ways to enter Truth / Enlightenment / Self-Realisation.
One entry is by Principle / Reason / Natural Rhythm and the other by Conduct.

Entry by Principle is to sit in your consciousness.
Control the mind to one-pointed focus so it is free of any delusion.

Four Conducts: Go with the flow or the conditions of your destiny.
Complain not. Redeem yourself through your journey whether praise or blame.
Ask for nothing. Act with no expectation of your action’s fruits.
Go according to the Paramitas of the Bodhisattva Path.

I have just recently returned from China, having spent 5 months in the monastary’s and surrounding villages and towns.

I have been really interested in the different reactions to China and its way of life by people in the west.  Mostly the comments have been about how China suppresses its people and they are not free to think and feel as they wish.

This led me to ponder further on the idea of control, especially control of the mind. The ideal of freedom by many it seems is that you can think and do as you wish.  Yogi’s and practitioners of Dharma and meditation have often written about this concept.  However it is always hard to write down how the mind appears!  A bit like trying to describe the smell of an orange to someone with no sense of smell!

So what do we mean when we talk about controlling the mind?  Well for me it is partly being able to remain in a state of calm when all around is in chaos.  Or alternatively, not reacting to difficult situations with blame and resentment.  Im going to illustrate this with a story shared with me by a Lama who had been told it first hand by His Holiness the Dali Lama. The story goes like this…

There was a monk who was captured and placed in prison.  Each day for over 20 years he was taken from his cell and tortured.  When he was eventually released, he went to see His Holiness, the Dali Lama.  His Holiness asked the monk. ‘were you ever in any danger?’.  The monk considered this, then he replied, ‘Yes, your holiness, every day’.

He paused then continued; ‘every day I was in danger of loosing compassion for my torturer’.

This story holds for me many messages, but one thing that stands out was the monks ability to continue to hold respect for all living beings, even whilst under great deprivation and pain.  How easy it would have been for him to be resentful and bitter, angry or vengeful.

If this monk can set such an example, perhaps the next time someone upsets you, think of the monk and imagine how he may have responded.  Jules 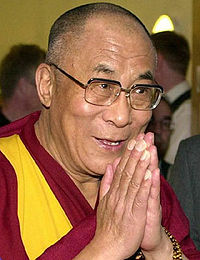 Often we do not understand fully the gestures or words which we use.  We just somehow feel a resonance with them. The gesture Namaste represents the belief that there is a Divine spark within each of us.  The gesture is an acknowledgment of the soul in one by the soul in another.

Although in the West the word "Namaste" is usually spoken in conjunction with the gesture, in India, it is understood that the gesture itself signifies Namaste, and therefore, it is unnecessary to say the word while bowing.

Simple to say, not easy to do!

Many people often wonder what Buddhism is about.  Is it a religion? Is it a cult or just a strange practice from the East.  Of course it is not easy to put into a box, something which has been developed and practiced for over 2440 years!  I like this well known exchange which took place between a famous Buddhist patriarch (Bodhidharma) and the Emperor of China.

The Emperor was desperate to know the deep and complex teachings of Buddhism and had asked him to travel many miles to learn from him. The Emperor had prepared the finest foods and waited for some time for the teacher to speak.    Finally Bodhidharma said ‘The essence of Buddhism is; cease to do evil, learn to do good, and purify your heart.’  The Emperor was outraged and said ‘but a child could understand that!!’ to which the teacher laughed and said, ‘yes, but even an old man of eighty is unable to put it into practice!’

With all that our modern life can offer us, why is it that each day we experience such negative feelings.  Why is it we feel that things are not fair, or that some how we have been dealt a rubbish hand.  Why are we never satisfied with what we have, and constantly strive to fill our homes with more and more ‘stuff’.   Studying Buddhist philosophy can begin to help us understand some of these complex questions, and more importantly help to cultivate within us a more positive outlook.   Jules